To share your memory on the wall of Lois Vermeer, sign in using one of the following options:

Print
Lois Faith (Hubers) Vermeer, age 85, passed away on January 4, 2020, at the Manor on Marston Lake in Littleton, Colorado.

Her funeral service will be held at St. James Presbyterian Church in Littleton on Saturday, January 11, at 10:30 am... Read More
Lois Faith (Hubers) Vermeer, age 85, passed away on January 4, 2020, at the Manor on Marston Lake in Littleton, Colorado.

Her funeral service will be held at St. James Presbyterian Church in Littleton on Saturday, January 11, at 10:30 am with a luncheon to follow. In lieu of flowers, it is Lois’ wish that contributions be made designated in her memory to the Medical Benevolence Foundation, 9555 Sam Houston Parkway S., Suite 170, Houston, TX 77099.

Lois was a kind and charitable person throughout her life and career. Born and raised in Iowa, Lois received her RN training at St. Luke’s/Methodist School of Nursing in Sioux City, Iowa and shortly after graduating, she married Richard A (Dick) Vermeer. After following Dick’s sales career to towns in South Dakota and Iowa, Lois and Dick settled in North Platte, Nebraska in 1964 and raised their four children there until her nursing career led to opportunities in Grand Island, Nebraska and finally to northern Colorado.

Raised in a Dutch household through the depression, Lois hated to see anything go to waste; seeing the things tossed out in the hospitals where she worked sparked her commitment to collect medical supplies for people around the world. She was innovative in her approach using "backhauling", "containerizing", and other tricks of the shipping industry to efficiently move those much needed medical supplies. Dick supported Lois' philanthropic efforts by collecting medical supplies while on business trips and storing them in his shop until there were enough supplies collected to make a shipment. As a result of Lois's hard work and dedication, she was invited to join the Medical Benevolence Foundation Trustees, where she served for many years.

After Dick’s sudden death in 2003, Lois went to Malawi on a trip they had planned together and she began a decade-long commitment to support hospitals there. During that first trip, Lois witnessed nurses having to walk miles back and forth from their homes to the hospital and determined to build housing for those nurses. Lois pledged her personal support and asked her many friends, her family, and anyone else who would listen to her presentation for small matching donations to build a hostel for nurses at Embangweni Hospital in Malawi. Lois' determination and drive led to her last trip to Malawi in 2013 to dedicate “The Vermeer House” to provide housing for nurses at this remote hospital.

Lois had many talents and joys. She loved baking for her family; holidays at the Vermeer home always started with the smell of her homemade rolls and her grandchildren could always find homemade cookies in the freezer. Lois and Dick loved to camp in the mountains, and they especially enjoyed hosting their grandchildren in the summer for camping and fishing trips, a tradition that she continued even after Dick’s passing. Lois was also an accomplished musician and served as a church organist in Iowa and Nebraska.

Lois is survived by her four children, seven grandchildren, one great-grandchild, her sister, a brother-in-law, three sisters-in-law, and 21 nieces and nephews. Lois' daughter Marianne lives in Virginia with her husband Robert and their two sons Nathan and Peter. Her son Dan lives in Arizona with his wife Aliria (Lily) and their daughter Danielle, with their son Brandon living in North Carolina. Her son Paul lives in Oregon with his wife Lisa and their daughter Britney, their son Eric, and Eric's daughter (Lois' great-granddaughter), Amelia. Lois’ daughter Susan lives in Colorado with her husband Matthew (Matt) and their son Sebastian. Lois’ sister, Marcia, resides in Florida.
Read Less

To send flowers to the family or plant a tree in memory of Lois Vermeer, please visit our Heartfelt Sympathies Store.

Receive notifications about information and event scheduling for Lois

We encourage you to share your most beloved memories of Lois here, so that the family and other loved ones can always see it. You can upload cherished photographs, or share your favorite stories, and can even comment on those shared by others.

Posted Jan 19, 2020 at 09:41pm
I remember Lois as a nurse at McKee Hospital in Loveland,Co. I was a new grad nurse and she was an established nurse. She was so wise and helpful to me,very supportive and full of energy. She was so kind and caring to all staff and patients. I will always remember her as an extra-special person who always went the extra mile in her work. She was a wonderful nurse role-model as well as a great friend and co-worker. I'm very thankful to have known her and learned from her. My prayers are lifted up for you,Lois , as well as for all her family.April Horst
Comment Share
Share via:
SP

Posted Jan 11, 2020 at 04:41pm
I have very fond memories working with Lois. Her caring and strong faith always overflowed to those around her. She brought a bright light wherever she was. She will be greatly missed.

Posted Jan 11, 2020 at 12:56pm
We remember the beautiful music she gave us as organist of the Presbyterian Church in North Platte, Nebraska. Following one Sunday service after the congregation filed out, with only myself left, Lois played the song "Let It Be" by the Beatles. The memory still resonates with me today when I think of her. With love & prayers, Doug Hoffman
Comment Share
Share via:
DH

Posted Jan 11, 2020 at 08:37am
Maybe you don’t remember me but I have many fond memories of Lois and Dick. Dick and I shared a birthday, 10 years apart. I just want you to know that Lois and Dick were truly remarkable people that left an indelible mark on my life and inspired me to be the best I could be. My heartfelt condolences to your family. I regret that I can’t make it to the service today. Prayers to your family - Lawrence Ostendorf, North Platte
Comment Share
Share via: 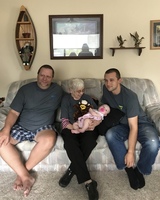