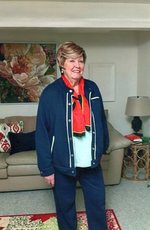 Kathleen also known as Kate Mary Black, passed away at her home in Denver, Colorado on August 19, 2019.
Kathleen was born to Catherine and Edward Black on April 14, 1935 in Baltinglass, County Wicklow, Ireland. She was raised as a Catholic. At a young age Kate left Ireland and began working, and at 22 she came to the United States and soon married Thomas R. Holland. They had three children, Kathryn, Stephen and Tracy. They lived in Newark, Delaware where Kate worked as a beautician in Philadelphia.
Kate would come to travel and live all over the world; London for a while and then to Vietnam during the war. While there she worked at Third Field Hospital in Saigon, a military hospital, and met Dr. Rene Vargas. Declaring him the love of her life, she married him and together they moved to Puerto Rico with her children. There Kate worked in the hospitality industry and represented several Canadian tour operators in the Caribbean, until 2000, when she retired and eventually moved to Colorado with her daughters.
Kate was very witty and outgoing, and was a beautiful woman inside and out. She loved dancing and gardening, having a fondness for flowers, birds, and all of nature's offerings... it was her refuge. She had a captivating personality, and her fun and vivacious wit was always what people remember most about her. She loved without fear, and with great depth.
She is preceded in death by her parents Catherine and Edward, her son Stephen, her sister Carmel, and Brother Ted. She is survived by her daughters Kathryn Sullivan, Tracy Holland, step daughter Larisa Vargas, grand children; Marco Malatrasi, Esteban and Andrea Holland, sisters Rose, Anne, Helen, Marie and brother Thomas.