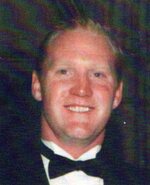 Jonathan Arthur Rose was born in May 10, 1972. He was raised in Littleton, Colorado and was a proud member of the Columbine High School Soccer program. He played four years in high school and coached both the girl’s and boy’s programs for several years post-graduation. Jon was a lifelong athlete and enjoyed playing on many sports leagues including soccer, bowling and golf. Jon was affectionately known as Rose, Roser, Red Baron, Jonny and simply Jon Rose by his many friends.

His most innate characteristic was his servant’s heart. To say he cared for and about others is an understatement. His career was with Laradon and he worked in the Adult Day Care Program providing direction, programing guidance, care and education to the residents. His commitment to his work and the people did not stop at the end of the day either. A recent story was recounted in which Jon went to medical treatments with a former resident for support and to help lighten the anxiety of the task. He was quick to lend a hand, run an errand, haul trash, offer a smile or a joke or simply be there for a friend in need. Jon opened his home as a safe haven to others on several occasions. Like most of us, Jon had his struggles. His biggest struggle was with alcohol and he ultimately lost that tough battle in February 2021.

Jon is survived by his mother, Marlene Rose, father and step-mother, Don and Diane Rose along with his sisters and their husbands, Beth and Trent Woolford and Susan and Mike Lucy, his niece and her husband Kajsa and Collin Ahrendsen and his nephews Dallin Woolford, Jackson Lucy and Cole Lucy. He is also survived by numerous aunts, uncles, cousins and of course his large, extended family of friends.