To share your memory on the wall of James Tracy, sign in using one of the following options:

He was the middle son of Nevin and Lillian Tracy. He was married twice and had 5 children that he adored and was extremely proud of. He is survived by his oldest brother Harry Tracy (Northglenn, CO) and his half-sister Mary Jane Nicholson (Dallas, TX). His children Cheryl (Joe) Hughes, Melinda (Gustaf) Soderbergh, Kevin Tracy & Mike
(Dominic) Tracy who were by his side during his final night.

He also leaves 5 grandchildren behind; Evan, Rachael, Declan, Marie and
Dylan and 3 step-grandchildren; Erik, Karl and Marie behind.

To send flowers to the family or plant a tree in memory of James Albert Tracy, please visit our Heartfelt Sympathies Store.

Receive notifications about information and event scheduling for James

We encourage you to share your most beloved memories of James here, so that the family and other loved ones can always see it. You can upload cherished photographs, or share your favorite stories, and can even comment on those shared by others.

Flowers were purchased for the family of James Tracy. Send Flowers 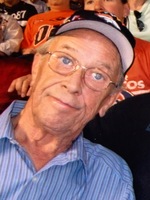