To share your memory on the wall of Caden Williamson, sign in using one of the following options:

Print
Caden Gage Williamson, 17, of Littleton, died in the early morning hours of Monday, May 13, 2019, from injuries sustained in a one car accident in Littleton, Colorado.

Caden was born May 10, 2002, in Longview, Washington, moved to Colora... Read More
Caden Gage Williamson, 17, of Littleton, died in the early morning hours of Monday, May 13, 2019, from injuries sustained in a one car accident in Littleton, Colorado.

Caden was born May 10, 2002, in Longview, Washington, moved to Colorado when he was a few months old, and remained in Colorado until his passing.  Caden was a member of the 2020 Junior Class at Chatfield High School in Littleton. Caden loved classic rock music, snowboarding, Oakley Sun Glasses, movies, the outdoors, Walt Disney World, and was an avid fan of the Broncos and Avalanche. Caden, like many teenage boys, loved to eat, a lot, often.

Serving as pallbearers will be Nick and Lane Williamson, Jeff Humphrey, Peter and Eric Forington, Trevor Saito, and Seth Osborne.

One of Caden’s favorite quotes: “The Dude Abides”
Read Less

To send flowers to the family or plant a tree in memory of Caden Gage Williamson, please visit our Heartfelt Sympathies Store.

Receive notifications about information and event scheduling for Caden

We encourage you to share your most beloved memories of Caden here, so that the family and other loved ones can always see it. You can upload cherished photographs, or share your favorite stories, and can even comment on those shared by others.

Posted May 30, 2019 at 12:44pm
My heart was caught when I read you suddenly lost your son Caden and I wanted to send my warmest condolences to the family. To lose a child, a part of you, can bring such overwhelming grief but Jesus assures us at John 5:28,29 that you will have him in your life once again without the pain we see today. Until God’s promises come true may every good thought, every memory of the love you felt, flood and overtake you with calm and peace to help you through the dark moments. Please go to jw.org for more encouraging scriptures and videos to help heal your broken heart 💔 https://tv.jw.org/#en/mediaitems/VODMinistryTools/pub-imv_4_VIDEO
Comment Share
Share via:
SR

Posted May 24, 2019 at 03:14pm
I’m so sorry for the tragic loss of your dear son. Please find comfort in Jesus words at John 5:28,29. There Jesus promised a resurrection of our loved ones who have passed away. This beautiful hope can sustain us during times of grief. Please accept my condolences.
Comment Share
Share via:
EA

Posted May 21, 2019 at 01:28pm
Caden matter and I'm so sorry that you are without him. He was a wonderful and kind person. He would have been an amazing adult.
I remember Caden when he was in 5th or 6th grade. When kids avoided adults. I went to Field Day that year and Caden saw me. He came right up to me with his friends and just started talking! It might not seem like a big deal but it felt great not being invisible. It truly made my day.
Caden made people feel good. He was a true gift. 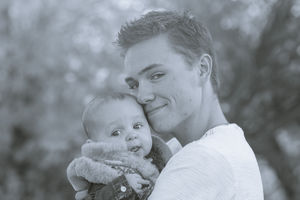