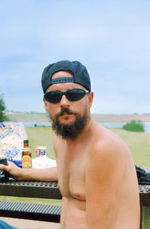 Bryan Lyle Fruik was born on May 11, 1961 in Grants, New Mexico. Growing up he had a fondness for the outdoors. He loved being outside. His favorite season was summer. Even though he loved the summer he would also get out an enjoy some snowmobiling in the winter months. He also loved working on cars and trucks and always had the tools needed. When he wasn’t outside, you could often find Bryan bowling. He had a fondness for bowling and over the years was on many bowling leagues. For most of his life, until recently, Bryan was a landscaper.

Bryan was often the life of the party. He loved his family, kids, his friends, and he loved animals. He was a very caring person who was always willing to share or give the shirt off his back if he needed. Actually, he was often shirtless. He almost always could be found shirtless with a pony tail though his hat and his sunglasses on.

His favorite saying was “It is what it is”.

Bryan is preceded in death by his parents, and his sister. He is survived by his partner Loretta Gonzalez of 30 years, his daughter Mariya Fruik, step children; TJ Miller and Heather Winkelman, and 5 granddaughters; Sienna, Jordan, Patricia, Alyx, and Braelyn.